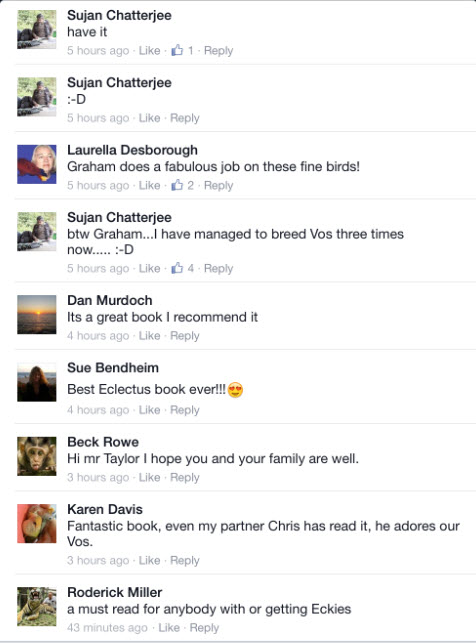 Eclectus Parrots – an experience by Graham Taylor, published in 2014 is a welcome update and revision of his book first published in 2003.Eclectus parrots are among the most beautiful parrots in the world. They are native to New Guinea, Solomon Islands, and the Iron Range area of northern Australia, the Maluku Islands and Sumba Indonesia.

Taylor is a recognized Australian aviculturist who has spent his life specializing in Eclectus Parrots. He owned and operated the Australian Bird Park. He is credited with the first captive breeding of the White-tailed Black Cockatoo and also the Red-browed Fig Parrot. He was the Curator of Birds and later the Director of Lord Alistair McAlpine’s Zoo in Broome Western Australia. Along with his son he developed the Aviculture Breeding and Research Centre in Bonville Australia.

Readers will find much additional information besides subspecies identification. Taylor also devotes chapters to the breeding cage requirements, diet, nesting requirements and handling of birds. He discusses, Eclectus Parrot health, how to spot a sick bird and what to do. Other chapters deal with chicks, hand feeding, brooders, fledgling, sales , shipping and the importance of record keeping. There is also a chapter written by a recognized American aviculturist Laurella Desborough on Companion Eclectus Parrots in the United States.

Even those who do not keep parrots would find the book of interest because Taylor includes discussions of his expeditions, his adventures travelling through dense rainforest, his encounters with aboriginal peoples, tree climbing to inspect nests and bird collecting. He describes the beauty of seeing flocks of wild parrots the danger of snakes and crocodiles. One can feel his interest and love of Eclectus Parrots grow.

The subtitle “an experience” is appropriate. It left me wanting more stories of his adventures. Graham Taylor clearly shows his love and respect for his homeland and the parrots he has devoted his life studying.